Sign the Petition for Carmela and Rex and Criminal Justice Reform

“I decided if the law enforcement of the state doesn’t want to do its job, it’s time for the citizens to take the law into their own hands, and I’m not talking about violence.”

With these words, Antonio “Ike” DeVargas opened a press conference on Saturday, February 8, to announce that he and Susie Schmitt are starting a petition drive to empanel a grand jury to investigate the deaths of their children, Carmela DeVargas, and Rex Corcoran, caused by “misfeasance, malfeasance, and other crimes that may have been committed by their county government and its agency, the Santa Fe County Adult Detention Facility.”

Carmela DeVargas died on November 9, 2019, and Rex Corcoran died four days later, on February 13, after being transferred to hospitals from the Santa Fe County Adult Detention Facility; their parents assert their deaths were due to the Facility’s negligence. Carmela died of infectious meningoencephalitis, inflammation of the spinal cord and brain after several months in the Facility on a probation violation. She had called her father and sister, Elisa DeVargas, numerous times to complain of fever and headaches and told them the guards ignored or mocked her when she tried to get medical help. By the time she was taken to the hospital—in shackles—she was paralyzed from the neck down. She made the decision to terminate her life.

Rex had been in the Facility for only seven days when he was transferred to Christus St. Vincent Regional Medical Center. Susie Schmitt told the crowd at the press conference that she tried unsuccessfully to reach her son by phone and never saw him alive again: she had to make the decision to take him off life support at the hospital. “You don’t go to jail healthy and come out dead. You go to jail for a minor offense that does not deserve the dealth penalty.”

Ike DeVargas initially asked the Santa Fe County District Attorney to investigate Carmela’s death but was told he had to file a police report. The Santa Fe County Sheriff told him he couldn’t do the investigation because, as an employee of the County, it would constitute a conflict of interest. DeVargas was referred to the State Police where he was told his complaint would be sent up the chain of command. He has not heard back from law enforcement.

Tired of waiting, and after successfully initiating a petition against the Rio Arriba County North Central Solid Waste Authority for alleged mismanagement and misappropriation of money, he decided to go that route to try to achieve justice for his daughter and the dozens of others whose deaths are due to the Facility’s malfeasance. The state’s constitution allows someone to impanel a grand jury with a petition “signed by not less than the greater of two hundred registered voters or two percent of the registered voters of the county.”

While the Santa Fe County Clerk will have to verify qualified Santa Fe County registered voters’ names on the petition, DeVargas and Schmitt are encouraging everyone who cares about criminal justice reform to sign the petition as a signal to the County that it’s time for it to investigate its Detention Facility. DeVargas’s attorney, Richard Rosenstock supplied him with links to dozens of criminal complaints, tort claims, and an ongoing class action lawsuit (filed in 2017), Armendariz et al.-v.-Santa Fe County, documenting appalling conditions and abuse by guards at the Detention Facility. DeVargas told the crowd, “We want accountability,” not settlements (up to $500,000) that do nothing to get rid of the “crap” at the top, not just the abusive guards who “mocked my daughter.”

Felina Romero of the ACLU also spoke at the press conference to announce that her organization is working with state legislators to reduce sentences for substance abuse cases. “We have a private prison here: this is slavery.” Rosenstock told the crowd that “This is a political issue. The Santa Fe County Commission should be interested in knowing what’s going on in its jail. Get on the commission agenda to force them to look into these abuses.” La Jicarita spoke to several activists in the crowd who said they are organizing to do just that: appear before the Commission to demand accountability.

DeVargas has also filed a formal complaint against the Chief Medical Officer at the Detention Facility, and plans to file a lawsuit as well. The New Mexico Medical Board agreed to investigate his complaint, saying it will take 90 days to do so.

DeVargas told the crowd he will continue to collect signatures for the next few months. Eighty-two people signed the petition at the press conference and took copies to pass out to family, friends and colleagues.

Here is a petition template you can print and circulate. Add a check by your name if you’re not a Santa Fe County registered voter. DeVargas address is printed at the bottom where you can mail completed forms. We will work to set up an online petition as well.

For people in Santa Fe, a copy of the petition will be available to sign at:
Martin Varela Farmer’s Insurance
1907 St. Michael’s Drive 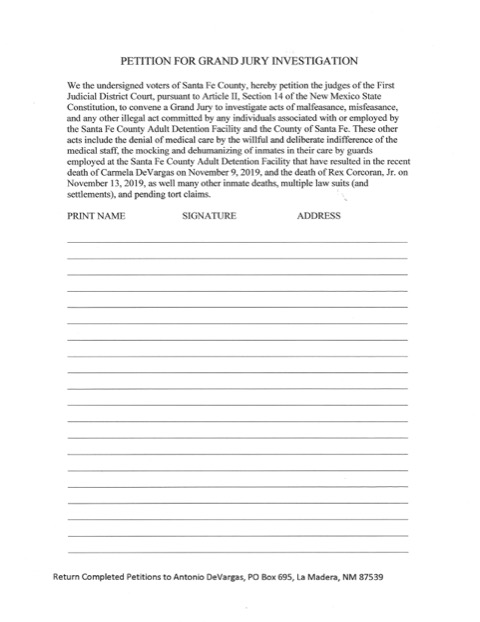