Sipapu Ski Area and Summer Resort opened on Halloween weekend after several small storms and some cold weather allowed it to power up its snowmaking machines and lay a base on a couple of trails (the resort quickly closed again after that initial weekend). The ski area bills itself as the first to open in New Mexico and the last to close, despite its relatively low elevation (8,200 to 9,255 feet), and that means there must be an adequate supply of water to make the snow necessary to do so. That was the underlying concern at the November 7 “community workshop” at Sipapu sponsored by the Pecos Wilderness Coalition, or Concerned Citizens of Las Mochas: does Sipapu need additional water rights to implement the proposed expansion and if so, where is it going to get them. 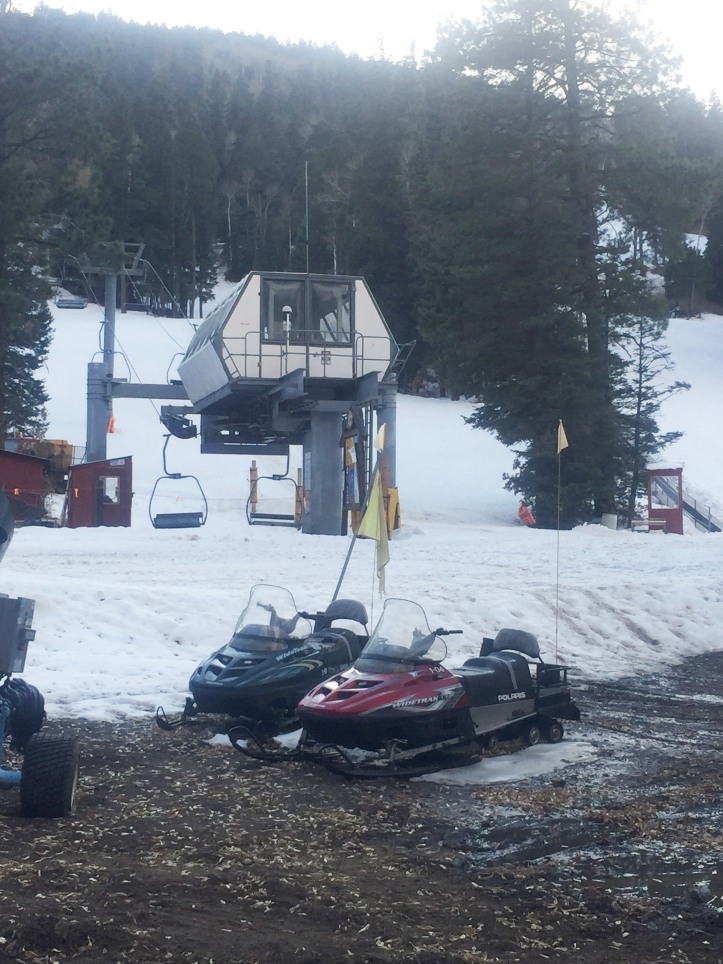 Ski areas are competing with each other for the acquisition of water rights to implement expansion plans during a time of extended drought and climate crisis. Here in New Mexico, Sipapu, Taos Ski Valley, and Ski Apache have applied or have already expanded within the last few years.

Sipapu first proposed a version of the expansion that is currently under consideration back in 1990: an expansion of the boundary from 185 acres to 977 acres (220 skiable acres); two new parking areas; two new lifts; and an additional 2,700 square foot restaurant/ski patrol building, including a well and septic system, at the top of the mountain. That proposal was never implemented—Carson National Forest withdrew the 1995 Final Environmental Impact Statement—but the proposal was kept in the bin for future use. After James Coleman of Mountain Capital Partners LLC purchased the ski resort in 2000, certain changes were made to the plan and a Master Development Plan (MDP) was submitted, and accepted, by the Forest Service in 2012. Subsequent changes were made and an amended MDP was resubmitted, and accepted by the Forest Service, in February of 2019. The increase in boundary size, 977 acres, remains the same, although in the intervening years Sipapu has incrementally increased its boundary from 185 to 238 acres. The MDP also includes 52 new trails, an additional 199 skiable acres, 11 gladed runs, three new lifts, the mountain top restaurant (although they say they will use composting toilets instead of a septic system), and extensive summer time activities including an additional disc golf course, mountain biking, climbing wall, bungee trampoline, summer tubing operation, zip line tours, and special evening stargazing.

A proposed expansion at Nordic Valley that included a 4.3-mile mountain-crossing gondola between the complex and the city of North Ogden was challenged by the community over water, economic, and environmental concerns and was withdrawn.

The next step for the Sipapu MDP is for the Forest Service to issue a SF299, the standard form for special use projects on federal lands, which then triggers the National Environmental Policy Act, or NEPA analysis: either a CE, Categorical Exclusion, EA, Environmental Assessment, or EIS, Environmental Impact Statement. In all likelihood, because of the scope of Sipapu’s MDP, the Forest Service will likely issue an EIS, a more thorough and involved process that requires archeological, biological, sociological, and economic assessments. Under an EIS, the Forest Service will hire a third party contractor to promulgate the study but retains ownership of the project. The NEPA contractor will initiate a Scoping Period during which the public can comment on the Sipapu expansion proposal. Alternatives will be developed, including a No Action Alternative, an alternative substantially similar to the proposed action, and alternatives that may adjust the scope of the expansion. A Preferred Alternative will be selected, a Draft EIS will be issued, public review and comment will be accepted, a Final EIS will be issued, and finally, a Record of Decision will be released. The Carson Forest Supervisor makes the final decision.

Sipapu’s rationale for the expansion is to “improve the variety of terrain and better disperse skiers on the mountain.” John Paul Bradley, Sipapu Mountain Manager, told the folks at the community workshop that the current carrying capacity is 1,182 skiers per day, while the expansion will increase that number to 3,600. But the ski area hit its capacity only twice during the 2018-2019 ski season, one of the best snow years we’ve had in more than a decade. The daily skier average for 2018-2019 was 453, or 54,360 skier days that season. That is 38 percent of current carrying capacity. Skier days in 2016-17 were 51,004 and in 2017-18 47,000. Growth from 2016-17 to 2018-19 was 6 percent over the two years, disregarding the drop in 2017-18. So, that is about 3 percent per year looking at the past 3 seasons. Scott Price, President of Mountain Capital Partners, told the group that the ski area has a major marketing program that includes hotel/ski packages for Las Vegas and Taos hotels, family ski packages, and free skiing for kids under 11 years old, but some questioned how it could increase capacity to 3,600 skiers per day when it has failed to reach capacity under its current marketing scheme.

Questions from the group immediately raised the issue of the area’s water rights and whether the expansion will require the acquisition of additional water rights. The ski area currently owns 18.46 acre feet per year (afy) diversion rights, which translates to 5.17 consumptive rights based on a 72 percent return flow. These water rights were transferred from the home of the Bolander family, the founder and previous owner of the ski area, in 1999, after it was determined that Sipapu had forfeited its own water rights when the highway department plowed over its acequia in the 1960s. Many folks have raised questions about the 72 percent return flow rate in general, and in this particular transfer the model used by the Office of the State Engineer to determine return flow credits was based on data collected at ski areas in Colorado at higher elevation and different topography.

When questioned as to whether these extant water rights are enough for the expansion’s snowmaking needs or whether Sipapu will be seeking water rights, Bradley gave a long explanation of how, in a good snow year, he could utilize what he has on “hot spots,” but admitted that the ski area is actively seeking additional water rights. In previous public meetings Bradley has held with stakeholders in the area, he stated that the ski area is seeking 56 afy of additional water rights to implement the expansion. He affirmed that this is the correct number. Bradley has also stated that because the ski area uses the water for snowmaking only in the winter, it acts as a storage unit until spring, when it melts and supplements water needed for irrigation. Robert Templeton, of the Embudo Valley Regional Acequia Association, has long pointed out that irrigators don’t need additional water in the spring, when there is danger of flooding, but instead are impacted by snowmaking in November and December when wells need to be replenished and winter crops such as cover crops are still being irrigated.

Sipapu previously attempted to transfer 100 afy of water rights from the Jicarilla Apache’s San Juan/Chama project in 2012 but pulled the application after it was protested by many Rio Pueblo acequias, Picuris Pueblo, and even the Forest Service. Several parciantes on the Rio Pueblo who were in attendance stressed that any water transfer to Sipapu needs to be from within the Rio Pueblo basin so they are compensated for any additional pumping from the river that could impact their downstream water rights.

Several other issues related to snowmaking were raised as well. A compound called Drift, which is used in the snowmaking process and deemed safe by Sipapu and other consumers, was questioned by Thom Greiner, a member of the Pecos Wilderness Coalition, from research he’d seen possibly linking it to cancer. James Coleman also told the group he would consider using treated effluent in snowmaking, which has been done at one of his other ski areas, Snowbowl in Arizona (the Hopi Nation sued the ski area over its use).

Several members of the Santa Barbara Land Grant raised the issue of who historically owned and cared for these lands that are now permitted to the ski resort by the Forest Service. Specifically, they asked how the community will benefit economically from this expansion and if local people will be hired at a living wage to work at the ski area. Bradley told the group that the area currently pays a starting wage of $9 an hour and an administrative wage of $17 an hour (65 percent of employees are being paid $9 an hour). He stressed that the ski area tries to balance an affordable lift ticket price with a decent hourly wage. Scott Price, the President of Mountain Capital Partners, told the group that every dollar made at Sipapu goes back into the maintenance and functioning of the ski area.

Another issue that many folks brought up at the workshop was the company that Sipapu has been using to map and design its MDP, SE Group out of Frisco, Colorado, that has worked nation wide on ski area development. They questioned Sipapu’s intent to hire SE Group to promulgate the NEPA analysis when that company already has a vested interest in the outcome of the analysis by virtue of its existing relationship with the ski area. Mountain Capital Partners has also used SE group at its other ski areas and claims it’s the best in the field. Several members of the Pecos Wilderness Coalition stated they were aware of numerous other companies capable of conducting the NEPA analysis that aren’t connected to Sipapu. As I stated previously, if an EIS is required, the Forest Service will hire the contractor.

The primary concern of the Pecos Wilderness Coalition, or Concerned Citizens of Las Mochas, is that the Sipapu expansion is literally in its backyard, with Chairlift B accessing numerous intermediate trails in the Comales Canyon Roadless Area above their houses. But longtime Las Mochas resident Roger Mason began his presentation by addressing another underlying question that had been lingering throughout the meeting: Is this expansion project economically feasible? From statistics provided by the University of Colorado, twenty percent of ski areas have gone out of business in the last decade and fifty percent are predicted to die by 2050. Linking these statistics to Sipapu’s procedural and operational track record does not bode well for the ski area’s ability to survive in a highly competitive market. Lack of adequate planning in areas of infrastructure, environmental protection, emergency management, public health, fire protection, parking, and lodging only contribute to Sipapu’s economic vulnerability. He encouraged the ski area to optimize what it now has rather than trying to expand: just making something larger doesn’t ensure success.

Other Concerned Citizens of Las Mochas members raised the same issue: lack of adequate planning on the part of the ski area. Thom Greiner tallied the letters he had sent to the Forest Service expressing his concerns: economic under-utilization; sewage spills on private property; SE Group conflict of interest; illegal motorcycle rallies operated on forest land; fires that destroyed half the lodge; and poor management of facilities on private land where the lodge is located. This last point was supported by another Las Mochas resident, Walter Smith, who complained about the inadequate management of the lodge and illegal parking that creates dangerous conditions along State Highway 518.

The meeting terminated with some Las Mochas residents’ “What if’” the expansion was reduced to exclude the Chair B west side lift and intermediate trails that intrude on the Comales Roadless Area that is literally their back yard. But the larger question was “what if” the Forest Service refrains from issuing a SF299 until all the other agencies that are outside Forest Service jurisdiction but are critical to comprehensive planning—the New Mexico Department of Transportation, the New Mexico Environment Department, the Office of the State Engineer—are brought into the process. This looks like it’s going to be just as long and contentious as the one 25 years ago.