Kay’s Note: No one can top a John Nichols’ review, so La Jicarita is reprinting his of Bill Whaley’ book Gringo Lessons, Twenty Years of Terror in Taos that appeared in Taos Friction on April 1. Nichols is not only a reviewer but was a player during la vida loca years of Whaley’s tenure in Taos—late 1960s to late 1980s—as a mostly failed entrepreneur whose ventures included the Plaza Theater, Plaza Theater Bar, Cortez Theater, Old Martinez Hall, the Taos Community Auditorium, and KVNM-FM radio, the precursor of KTAO. While he often lost his shirt and his sanity during those years of terror, he gave the Taos community downtown movies ranging from Fellini’s 8 ½ to Blazing Saddles, lots of memorable bar experiences, an Earl “Fatha” Hines concert, and a rousing production of West Side Story. 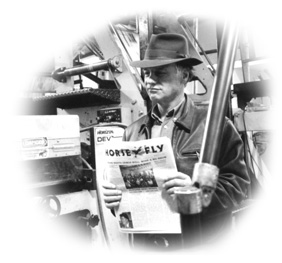 Whaley left Taos in 1987 to resume a college career in his home state of Nevada, but 10 years later he was back, as an ABD (all but dissertation). That’s when I met him as a fellow journalist/publisher: me, of La Jicarita, he, of the “monthly rag” Geronimo (December 1998-August 1999); Horse Fly (aka the Pesky Insect, September 1999-September 2009), a monthly critique of politics, art, and culture; and finally, the online Taos Friction, which takes the Taos politicos to task on an almost daily basis, parsing Horse Fly friend Flavio’s estimation of the town: “Taos is a great place to visit but you wouldn’t want to live here.” Whaley will be back with another romp through these years of journalism in a sequel, Taos Redux: The Horse Fly Years. Gringo Lessons is available at Brodsky’s Bookshop in Taos or from the author: Bill Whaley, P.O. Box 1135, Taos, NM 87571.

Gringo Lessons is Bill Whaley’s rollicking (and scarifying) dance down the New Mexico yellow brick road with myriad assassins hiding behind every bush, every movie theater, every cantina, every bank, and every personal relationship eager to ambush the author, muckraker, and entrepreneur par excellence, who, over the last fifty years, has somehow remained determined to conquer Taos, New Mexico by declaring bankruptcy every couple of years while repeatedly doing exquisitely athletic leaps off of the Northern New Mexico economic and cultural high diving board into an empty swimming pool.

You have to admire his chutzpah even as you wonder if he was dropped on his head as an infant or at least bucked off a large horse on his parents’ Nevada ranch when he was just knee-high to a slot machine. Whaley seems to have had more comebacks than Richard Nixon, and more jail escapes than Willie Sutton, and I imagine that reading about his Perils-of-Pauline adventures will have you mainlining Lipitor.

This wonderful autobiography is as honest as the day is long, no holds barred, no punches pulled. It’s beautifully written, highly entertaining, truly wild and wonderful even as it also may make you cringe on every other page. This pilgrim’s progress is definitely not a stroll through a summer meadow. Whaley might have done better not to have gone AWOL from the National Guard, but to have punched his ticket to Vietnam instead.

Incredibly, so far, the author is a survivor in Taos, although we shouldn’t be counting his chickens yet. I’m not saying Bill is an exact replica of Candide, but he might qualify as Lemuel Pitkin, the snakebit hero of Nathaniel West’s novel, A Cool Million. That book states that every American boy “has the right to go into the world and there receive fairplay and a chance to make his fortune by industry and probity without being laughed at or conspired against by sophisticated aliens.”

However: “Alas, Lemuel Pitkin himself did not have this chance, but instead was dismantled by the enemy. His teeth were pulled out. His eye was gouged from his head. His thumb was removed. His scalp was torn away. His leg was cut off. And, finally, he was shot through the heart.”

Nobody has yet shot Bill Whaley through the heart.

However, after reading this improbable and fascinating tale of Bill’s myriad combats with sophisticated aliens one remains astonished that its author is still perpendicular and as optimistic and irreverent as ever.

That said, Bill’s ability to make sense of his tangled life with clear and exhilarating prose is a real treat. Even after so many years on the barricades, he is a writer at the apex of his talents. Whatever else you might say about it, this is a good book. It’s really enjoyable.

After years of being one of the great serious, and satirical journalistic–and artistic–voices of Taos, Bill has written a remarkably fast-paced, often humorous, and very moving adventure story about Taos that is testimony not only to the resilience of the author, but also to the resilience of Taos, New Mexico itself.

My friend Charley Reynolds always told me that “Taos ain’t for amateurs,” and this book proves it, even though, at heart, the book is also a love story to the town that has repeatedly cut Whaley off at his knees, only to have him come back repeatedly for more in his search for the Holy Grail.

I’m not sure Bill will ever find that grail in Taos, but that’s not the point. The journey is what counts, never the end result. And Bill Whaley has been on a remarkable journey that he recounts with a whole lot of superb piss and vinegar.

Taos, as described herein, is a rich, mesmerizing, deliciously complicated and beautiful little town where, just as you may think it’s safe to go back in the water, you lift up the corner of your living room rug . . . and promptly get mugged (i.e., torn limb-from-limb) by the Bride of Chuckie.

Whaley’s motto seems to be: “If at first you don’t succeed, die, die again.” I stand in awe of his perseverance, his sense of humor, and also of his skills as a writer and as an always perceptive observer of his own Operation Barbarossa (a reference, for those too young to remember, to Hitler’s ill-fated invasion of the Soviet Union back in World War II).

That Bill has major-league guts goes without saying. Where he is now bound, I cannot imagine. He says a continuation of this story is in the works, and I, for one, fervently look forward to it.

To sum up, so far Bill Whaley’s life answers the eternal question raised by Freud: “What did Don Quijote want?”

And the answer is: “More windmills,”