Mining is big business in New Mexico. Coal, molybdenum, silver, potash, aggregates like gravel dirt, and industrial minerals such as gypsum, brick clay and silica are removed in the millions of tons each year.

The bonanza of mineral extraction in New Mexico follows one of two procedures, either through pulverizing rocks with heavy machinery and then leaching out valuable minerals by using chemicals, or through hydraulic methods such as placer mining, in which metals in alluvial deposits are literally washed out.

The environmental cost of either method can be enormous. In industrial scale operations, both methods produce huge amounts of often toxic waste materials. Contamination from mining chemicals and waste materials such as lead and cadmium is particularly acute at the site of extraction, where wastes leach into soils and groundwater.

The New Mexico Water Quality Act (§§ 74-6-1 et seq., NMSA 1978) requires that regulatory agencies, such as the Water Quality Control Commission (WQCC) of the New Mexico Environment Department (NMED), prevent and/or abate possible water pollution. In order to meet this obligation, WQCC and NMED have established standards and thresholds for what they consider acceptable levels of contaminants. They then require that polluting industries propose mitigation procedures so as to limit the impact of those activities on groundwater quality. In practice this means that every permit is different—each one a lengthy negotiation over thresholds and standards and schedules of inspection involving hydrogeologists, lawyers, state regulators and industry representatives.

These negotiations begin with the premise that with careful monitoring the economic benefits of such activities can outweigh any negative environmental effects. It’s a devil’s bargain.

In 1979 the Church Rock uranium mill tailings pond (fully permitted by the Environment Department) breached its dam and dumped 1,100 tons of radioactive waste (more than 90 million gallons of toxic effluent) into the Rio Puerco. Significant amounts of uranium, thorium, radium, and polonium found their way into the Rio Puerco along with metals such as cadmium, aluminum, magnesium, manganese, molybdenum, nickel, selenium, sodium, vanadium, and zinc in a lethal stew that turned the Rio Puerco into one of the most contaminated rivers on earth.

This may explain why the word “protection” is not in the name of the New Mexico Environment Department. Despite the heroic efforts of many hard-working and well-meaning regulators, the WQCC and NMED are in the business of licensing polluters, not protecting the environment.

We may want to ask what exactly it is that we get in return? Jobs? Hardly. The huge transnational mineral conglomerates that legally poison New Mexico’s rivers and groundwater and share in the windfall profits mineral extraction provides employ less than 6,000 people, few of whom are New Mexico residents. Tax revenue? Not really. The revenues that flow into state coffers barely cover the cost of “regulating” the industry.

So why then are we willing to let mining conglomerates like the notorious copper and gold giant Freeport McMoRan (see our recent essay on the arrival of Freeport-McMoRan in New Mexico) poison groundwater and foul streams? 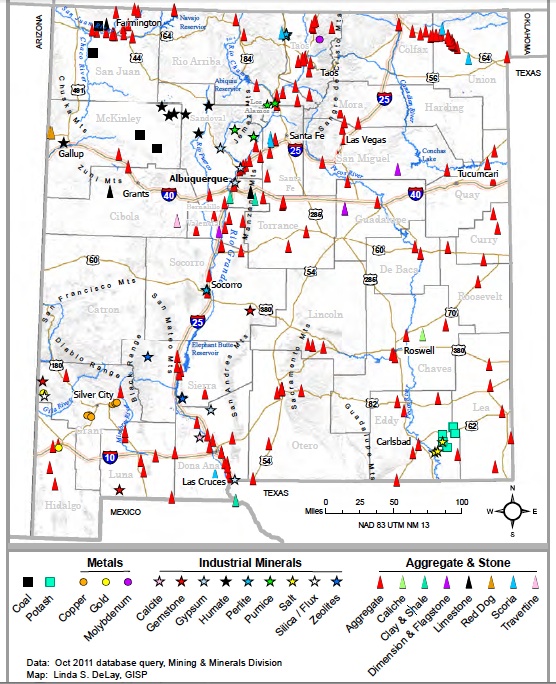 The answer may have something to do with the power and influence of those mining conglomerates. In 2010, the total production values of all mineral extraction in New Mexico exceeded $1.7 billion. Flush with cash, oil and gas lobbyists and mining firms poured millions into Martinez’s campaign for Governor. After her victory, executives and lawyers for Freeport-McMoRan were nominated to key posts in the New Mexico Environment Department and served on the task force that drafted new language for the copper pit rule.

Dairy operators were particularly generous to candidate Martinez. Governor Martinez returned the favor. Following her election, Martinez refused to publish the new and more stringent dairy pollution standards. It was a rule established under her predecessor and only after the dairy industry had appealed to the Richardson administration to restructure the way the dairy industry was regulated. It seems they were tired of negotiating permit after permit. They preferred instead that the state not only establish pollution thresholds above which the industry could not pollute, but also establish the procedures and methods through which the dairy industry would meet those standards. Thousands of manure lagoons in New Mexico poison groundwater and the new rule required, among other improvements, synthetic liners to those impoundments. Martinez however refused to publish the new rule. Instead the NMED negotiated a new standard that watered down the rule.

Copper was next. Martinez established an advisory committee to the New Mexico Environment Department and charged it with drafting language for a new copper pit rule. She stacked the committee with industry representatives, including Freeport-McMoRan, but also included some industry critics. The result was a set of standards far from perfect but much better than existing practices. But NMED’s general counsel, Ryan Flynn, a Martinez appointee and close friend of the mining industry, ignored the committee and instead adopted wording written by Freeport-McMoRan lawyers.

In a remarkable and unprecedented shift in policy, the New Mexico Environment Department now recommends that mining operators in the state of New Mexico freely pollute groundwater at the site of production. Under the proposed new rule, Freeport-McMoRan and other copper mining operators would not be required to protect groundwater at all within areas of “hydrologic containment” and “open pit surface water drainage.” In other words, the rule defines mining as an activity completely exempt from the water quality standards established by the New Mexico Water Quality Act. Unbelievably, the NMED, the agency charged with regulating polluting industries in New Mexico, now wants its mining permits to become, by law, permits to pollute.

On Friday, December 14, the New Mexico Environmental Law Center (NMELC), on behalf of Gila Resources Information Project, Turner Ranch Properties and Amigos Bravos, filed a Motion to Dismiss the New Mexico Environment Department’s proposed new copper rule. According to NMELC’s lead attorney on the suit, Bruce Frederick, the new rule represents “an unprecedented” attack on water quality standards in New Mexico. Instead of protecting groundwater quality, the new rule sacrifices it. Instead of establishing standards based on the best available science, the new rule seeks to do the bidding of industry.

The motion is particularly critical of language in the proposed rule that gives mining industry carte blanche to pollute. “During operation of an open pit, [water quality] standards do not apply in the [Sacrifice Zone].”

The NMELC anticipates a hearing on the motion by mid-February and asks the WQCC to either adopt the language of the advisory committee or send the recommendation back to the NMED for revision.

Frederick is not optimistic about NMED leadership. If the Freeport-McMoRan-written rule becomes administrative law, other industries will surely seek similar arrangements. And what those lobbyists will find is an Environment Department reorganized over the past two years as a vehicle designed to advance industry interests over any concern for environmental protection. Since Susana Martinez came into office, outraged regulators have resigned from the agency en masse. In their place she has appointed political lackeys and industry lapdogs. “Anybody who cares about the environment,” according to one former NMED lawyer, “is no longer in a position of authority…. There’s no separation between industry and government.”